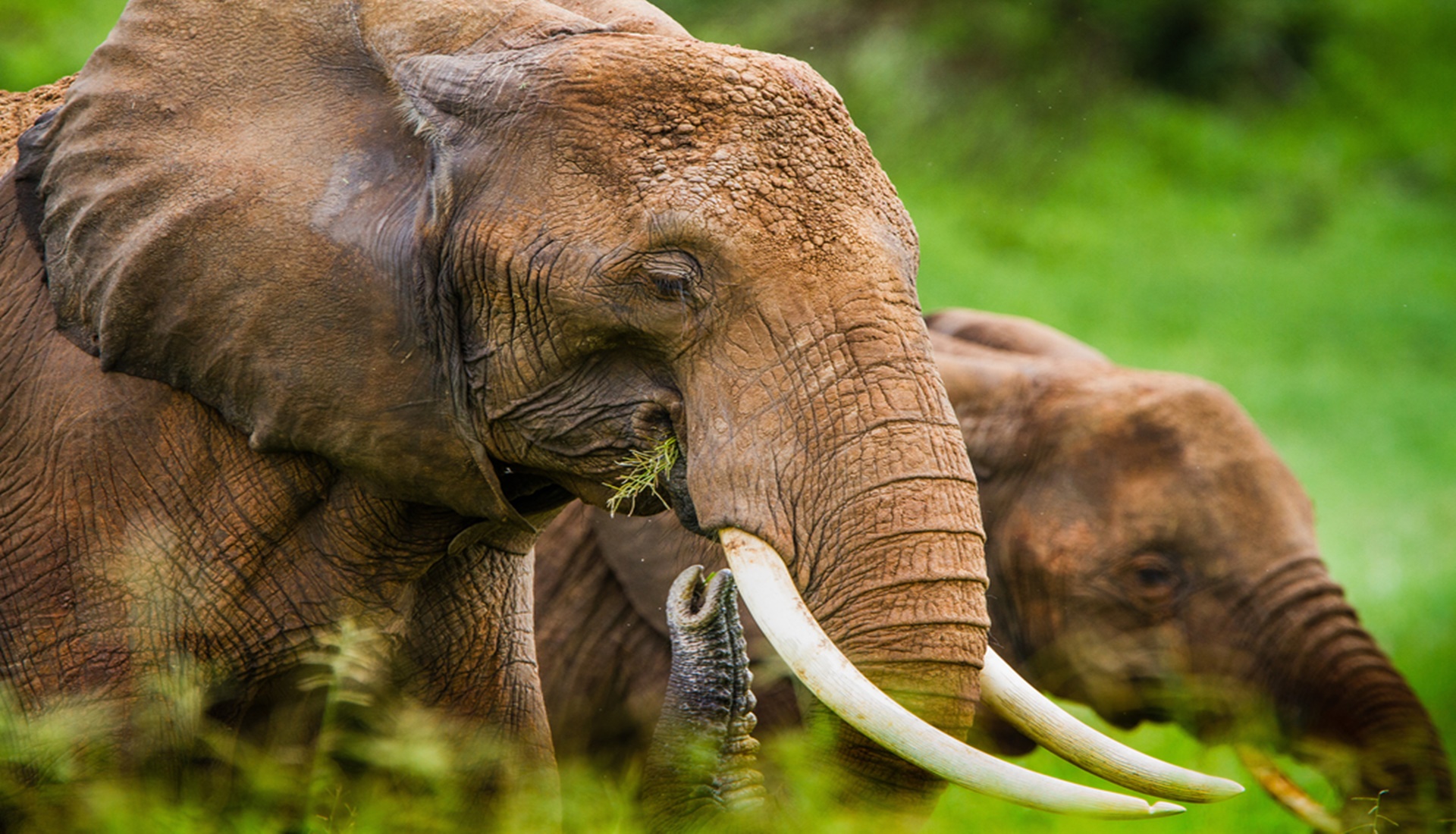 Ruaha national park is one of the few of Tanzania’s famous wilderness areas where one can have a rare experience of game viewing spiced up by the fascinating landscape. The park is rich in plants and animals such as Greater Kudu (Tragelaphus strepsiceros) which can not be found in any other national park. The park boasts of her almost untouched and unexplored ecosystem, making visitors’ safari experience very unique.

The Great Ruaha River like other rivers like Mwagusi, Jongomero and Mzombe save as the lifeline of the park. During the dry season, these rivers become mostly the main source of water for wildlife. There are few natural springs saving the same purpose.

In the pick of the dry season, elephants obtain water from dry sand rivers using their front feet and trunks. The remaining water falls along the Great Ruaha River are also an important habitat for hippopotamus, fish and crocodiles.

CLIMATE
Ruaha National Park has a bimodal pattern of rain forest; the short rainfall season begins November to February, while the long season is between March and April. The annual mean rainfall ranges between 500mm-800mm with an average annual temperature of about 280c. The park experiences its dry season between June and October when the temperature at Msembe headquarter reaches 350c.

PARK HISTORY
The park history dates back to 1910 when it was gazetted Saba Game Reserve by Germany then the name was changed by the British to Rungwa Game reserve in 1946. In 1964 the southern portion of the Game was gazetted as Ruaha national park and in 1974 a small section of the South-Eastern part of the Great Ruaha River was incorporated into the park. The name “Ruaha” originates from the Hehe word “Ruvaha”, which means “river”. Ruaha National Park is part of the Rungwa-Kizigo –Muhesi ecosystem which covers more than 45000km2. In 2008 Usangu game Reserve and other important wetlands in the Usangu basin have been annexed into the park, making it the largest park in Tanzania and East Africa with an area of about 20226km2.

PARKS SIGNIFICANCE
Ruaha National Park has a high diversity of plants and animals including elephants, buffalos, antelopes and some rare and endangered species like wild dogs. The park serves as a water shade both for wildlife and human being. This makes it to be economically significant as it supports agricultural activities down stream and contributes to hydroelectric power (HEP) for the country at Mtera and Kidatu dams.

TOURISM ATTRACTIONS
Birds
The park is one of the Tanzania birds’ paradise with more than 571species and some of them are known to be migrants from within and outside Africa. Migrating species from Europe, Asia, the Australian rim and Madagascar have been recorded in the park. Species of interest in the park include Ruaha red-billed hornbill (Tokus Ruaha) which is dominant in the area. The recently annexed wetland, the Usangu basin is one of the country’s important bird area (IBA) as recognized by Birdlife International. Though birds can be seen all the year round, the best time for bird watching is during the wet season.

Animals
Ruaha is believed to have a high concentration of elephants than any national park in East Africa. It is also a place where, magnificent mammals like Kudu (both Greater and Lesser), Sable and Roan antelopes can easily be spotted in Miombo woodland. The male Kudu have beautiful spiralled horns while the male Sable antelope have impressive curved horns. The park is also a habitat for endangered wild dogs. Other animals in the park include lions, leopards, cheetah, giraffes, zebras, elands, impala, bat-eared foxes and Jackals.

Reptiles and Amphibians
Apart from large animals, the park also harbours a number of reptiles and amphibians such as crocodiles, poisonous and non-poisonous snakes, monitor lizards, agama lizards and frogs. The Great Ruaha and Mzombe rivers are presumably the most preferred habitat for crocodiles.

Historical and cultural sites
There are several historical and cultural sites in the park which offer a visitor a chance to explore the Southern Tanzanian tribes. The early trade routes used by the Arab caravan crossed here. In 1830 these coastal traders expanded their routes northward, and in the year 1857 to 1858 other European explorers such as Burton and Speke used these routes too. Chief Mkwawa used the same routes to visit his chiefdoms in Sangu and Gogo.

The park area often hailed as the land of the brave Chief Mkwawa, the Chief of the hehe people who resisted the German attack in the late 19th century. The fierce and successful battle tactics against the German invasion made the Hehe tribe famous in the Southern highland of the then Tanganyika (Tanzania). The Hehe tribe under the leadership of chief Mkwawa was dominant around the Ruaha area. Some of the outcrops in the area are known as hiding places of chief Mkwawa who went into hiding after the fall of his empire (kalenga) to the German in 1894.
In brief, it is believed that this ancient land (Ruaha National Park) holds many secrets of chief Mkwawa.

Some of the cultural sites that were used for rituals are “Ganga la Mafunyo”, Nyanywa and Chahe, Painting rock at Nyanywa, the “Gogo”  chief “Mapenza” grave at Mpululu and “Mkwawa” spring area believed to be used by Chief Mkwawa. Other historical sites near the park include Isimila pillars near Iringa town, Kalenga, Mlambalasi, Lugalo and God’s bridge just to mention a few.

Rivers
The river systems and watershed are of economical, social and ecological significance for the park itself and the country at large. The main rivers include the Great Ruaha, Mzombe, Mdonya, Mwagusi and Jongomero.

Natural springs
They occur throughout the park and they are associated with the base of the Western Rift Valley escarpment, most notably Mkwawa, Mwayembe, Makinde and Majimoto springs. These are dry season refugees for wildlife and when most of the rivers get dry.

The wet season (January –April) is best for bird watching, lush scenery and wildflowers. The male Greater kudu is most visible in June which is their breeding season.

How to get there
By air
There are both scheduled and chartered flights into the park mainly from Arusha, Dodoma, Kigoma and Dar-es-salaam. Park’s airstrips are located at Msembe and Jongomero

By road
It is about 130km drive from Iringa town and 625km from Dar-es-salaam city.
The road into the park is passable throughout the year.

Accommodation
There are park and privately owned facilities

Private facilities
Inside the park
There are several luxury tented camps operating in the park such as Jongomero, Kigelia, Mwagusi safari, Old Mdonya River, Kwihala and Flycatcher and one lodge namely Ruaha River lodge. These are privately owned.

Outside the park
There are several accommodation facilities just outside the park: these are hilltop lodge, Sunset lodge, Tandala tented camp to mention a few.

– Do not disturb or feed animals.
– Do not make noise or any sort of disturbance that offend other visitors
– Do not pick or destroy flowers and plants
– Littering, burning cigarettes or matches is strictly prohibited
– Pet are not allowed in the park
– Never go for a walking safari without park official armed guides/rangers
– Always stay on the authorized trails during walking safaris
– Hunting, collection of plant and animal samples is not allowed
– Tourism activities should be conducted between 6 am and 7 pm. For the rest of the time, visitors are expected to be in their accommodation places (i.e. lodges, camps and/or campsites)
– Off-road driving is strictly prohibited